Since 2010, it is a pleasure to work at the yearly television production of the José Carreras Gala, the main charity event of the German José Carreras Leukaemia Foundation.

The translator duties in this TV production are to serve as a communication bridge between the German Foundation and the Spanish Foundation, the German production company (Kimmig Entertainment) and, of course, Mr. José Carreras, who hosts the bilingual Gala together with a German co-host. This includes translating content from German to Spanish and vice versa, as well as linguistically supporting the final production process on the site.

Due both to the excellent work of the German and Spanish Foundation in the research and fight against leukaemia and to the remarkable commitment of Mr. José Carreras with this cause, every year it is a pleasure and a honour to collaborate in this event. 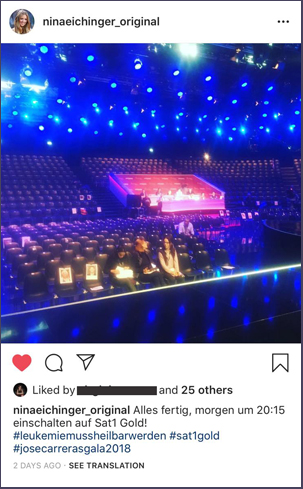 Berlin I Barcelona
+49 (0) 176 251 403 95
We use cookies to ensure that we give you the best experience on our website. If you continue to use this site we will assume that you are happy with it.OkNo